So the time has finally come to bring your baby or babies home.  You may have spent four days or you may have spent a hundred or more days.  Whatever the number, you are ready to go home and you've probably been dreaming of the most beautiful words, "You can take your baby home."

You have most likely been trying to wait, as patiently as possible, for this day to come.  You will probably have the urge to just get up, get that baby in the carseat and run for the doors before they change their mind (possibly having already happened in the past.)

It is hard for a preemie parent to believe the staff that a discharge is really happening, until the baby is safely clicked into the backseat and you are actually driving off hospital property!

If you've ever seen the Ikea sale commercial where the woman thinks a mistake has been made as she walks out the doors with her arms full, running for the car in the parking lot, hollering, "Start the car! Start the carrrrr!!"  A preemie mom kind of gets this overwhelming feeling and that she needs to get out of there lickity split before someone changes their mind!

It is true that often the discharge date spoken of comes and goes.  My suggestion is to try to avoid discussing a date for discharge too often, as the staff never know when a "hiccup" may come about and it can be extremely disappointing to get ready to leave, only to be told your baby is not going anywhere today.  I personally think it is best to keep a general timeframe in mind as to when you think your baby may be well enough to go home.  You, as a parent, will get to know your child and I think mothers also have a personal intuition as to when that date is nearing.

Another suggestion I can give is that if you feel your baby is ready to go home, but the doctors haven't given the okay and you're not sure why, make sure you ask why.  Get the facts.  Listen to them and don't be afraid to question some choices if you feel something doesn't make sense to you.  As a parent, you probably know your baby best than any of the professionals who have been helping along the way.  Staff changes every few days, people go on holidays and sometimes you don't see some staff members for weeks at a time, making you the one constant person by your baby's side.

I'm not saying that you should try to rush your baby out the door, but for you to be educated about why some choices are made and to ensure you feel like you understand the reasoning why your child is possibly not yet ready to go home.

My first preemie was pretty much a perfect, step-by-step, quick out the door NICU stay.  He was discharged at 35 weeks after 3 weeks and 5 days' temporary residence in a Level III and then Level II NICU.  I had barely gotten to know the staff and then out the door we went.

My second preemie (AKA: Twin A) came home almost at his EDD (Estimated Due Date)--about "5 days corrected."  For this baby, I had to talk a lot to staff about taking him home.  I had to ask why he was still there when he was doing so well, he was feeding perfectly, he was growing quickly.  I pretty much had to state my case as to why I felt he should be discharged and sent home.  I was starting to feel like I should be a lawyer for my next career.

Given the fact that I had a previous premature baby, I know this helped the staff develop confidence in me and my ability to take care of Twin A once he was home.  For me, bringing home one baby would help me out in the long run, as I was balancing NICU life with the outside family life.  Having a two-year-old being bounced around from grandparent to grandparent, house to house, was taxing on this littly guy.  To bring his one brother home would be a start in the right direction to getting a little taste of reality.  It also would enable me to transition into life with babies at home again and get our oldest son accustomed to a baby around.  Once Twin A was discharged I would be able to look after him when I wasn't in the NICU with Twin B and my very supportive mother or mother-in-law would watch Twin A during the day, while I ran back and forth to look after and check on Twin B.  He did get discharged after lots of work and compromise.

Preemie number 3 (Twin B) continued to hang out in the NICU for three more weeks following the discharge of his "older" brother.  He was a tricky one, this little boy!  He had VP shunt surgery just a few days before Twin A went home.  He was doing so well at the time of the surgery and the doctors on at that time were confident he'd go home within a couple of days of his surgery.

Remember how I said, don't believe it until it's actually happening?  Well Twin B was not discharged a few days after his surgery because he suddenly forgot how to suck, breathe, swallow when nursing or bottling.  This little boy had been better at breastfeeding than his "older" brother and he suddenly forgot how to.  He was doing amazingly well up until about 48 hours after surgery, when he just got pooped out.  The doctors felt perhaps he had been rushed to get back to full feeds, which was a combination of bottling and nursing.  So after 48 hours he began to gag and cough, choke and sputter his way through his feedings.  It was disheartening.  He was having such a rough time that the concern began to be that he'd aspirate and then have a major problem.

To think we were so close to going home, when all of a sudden things just changed.  That's life in a NICU.  He ended up having to go back to feedings by a NG tube, which really sucked to see.  For a couple of days he got his feeds just through the NG, to give him some time to recuperate and rest.  We didn't want feeding time to be stressful on his body or on anyone else trying to feed him, so the NG tube served a good purpose at that time.

The NG tube is one of those things that you don't want to rely on too long if you can avoid it.  Twin B still had his NG 2 weeks later, which was beginning to get to me.  He was not having every feed by NG any longer, but I was determined to really get to the point that the NG was a back up plan.  He was still coughing and sputtering through many of his feeds, but with some hard work the NG came out a few days later.  He was still up and down with his weight gain, which is why he was having to remain in the hospital.  He was also still in isolation, which I speak of in a previous posting.  My opinion was that with a NG tube, me trying to nurse him when hooked up to the numerous wires, all the while wearing gloves and gown, we were robbing my baby of a natural feeding process.  I spoke about this with his neonatologist at the time and low and behold...he agreed!  Off came the gloves while nursing him, out came the NG tube.  The baby was to prove himself over the next few days.  He had some great weight gains and then not so great gains.  He didn't lose weight, so that was a good thing.  Had he started to lose weight he would have had the NG tube put back in.  Finally, 3 weeks after his surgery, he was discharged and I brought him home!  He came home with a NG, "just in case." But overall that day was nothing but relief!  That was the longest 112 days of my life.

Once your baby is discharged from the hospital it can be like going into the great unknown.  You don't know if you'll be back again due to an unforseen complication or if you'll go on without any new hiccups.  As a parent you are now left to fend for yourself and learn the ups and downs of having a baby--a premature baby--outside of a hospital.  It can be a scary and draining experience.  So my final recommendation here is to ensure that you have all the support you can get from family, friends, co-workers, neighbours...where ever you can find help do your best to get it.

The best part of discharge is taking your baby (babies) home and seeing them snuggled in their own bassinets, free of leads, blinking lights and constant beeping all around. 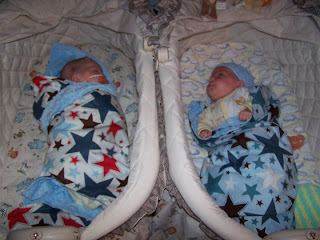 Twintrospectives
A Canadian mother to 3 boys, all born premature. My eldest is a 31 weeker and his twin brothers were born at 27 weeks. The experience of preterm birth not once, but three times has been life altering, but an amazing journey over the last 5 years. In addition to being a full time mom, I work full time for a non-profit and in my "spare time" I am a Peer Health Worker, supporting other parents of multiples in my region. I am also Chair of MBC's Preterm Birth Support Network.

Preemie # 1 chillin' in the NICU

That's What I'm Talking About